This is a repeat of the blog post I did last year on my 18th birthday and I am doing it yet again on my 19th. It just shows generally what I'm into at the moment and it will be interesting to see exactly how much it has changed since last year!

I scored interviews with both Microsoft and Google, however Microsoft gave me an offer first for their USA internship in Redmond WA so I have accepted that (hopefully a post shall be coming soon on this whole experience). Otherwise just the usual uni stuff is on and it's getting rather hectic in the last year, the year long project is building up plus all the assignments from the other subjects.

Most my genres I like are exactly the same as last year, however I will mention the new ones here:

Experimental / Electronica / Who Knows - Flume, Hermitude
Future House - Mostly Tchami and records from Deep Sounds on soundcloud. This is a genre I found when describing the sound of music to James Rogers who kindly told me it was called Future House.
Synthpop - Com Truise, RAC (especially his Tokyo Police Club remixes) and others

Here is my May 2015 favourites playlist (click to enlarge): 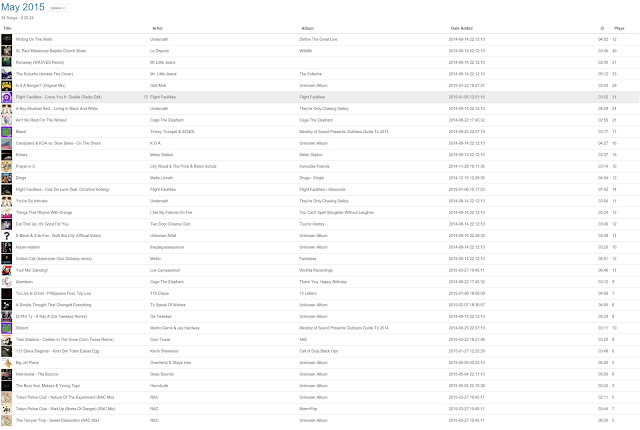 Still my favourite movie is Mr. Nobody (2007).
I watch a few TV shows, and love watching the following when they air:The Walking DeadHouse of CardsGame of ThronesI am also making my way through Parks and Recreation and am midway through season 3 at the moment. I clocked Dexter last year, was a good series.

Same as last year, but I did purchase COD Advanced Warfare on PC around Christmas and it has been awesome playing that game, the dynamics of the exo suit jumping makes the game really fast-paced and fun. I still play MW3 on PS3 with Josh and Sam sometimes.

Still running Arch Linux with i3 as the window manager (see older posts for more info).

Still the same hardware as last year, nothing has changed! (might get another mech keyboard soon though, not sure if I'll get a 60% keyboard or a new Ducky Shine 4 or something).