Over the last few months I have been loving a new window manager I have switched to called WMII which stands for Window Manager Improved Improved.

It all started out when I noticed in a couple of LAS episodes and 'Why Linux Sucks' talks that Brian Lunduke mentioned and the Awesome window manager () and about how hardcore they were. When I saw pictures of what they looked like (on the above websites) I freaked out because I started to think it was just for people who wanted to be in a terminal all day. This is a really bad mis-conception and I would like to say now to clear it up for everyone that you can run the same applications you run in unity, gnome, kde (or what ever floats your boat) inside of WMII and other tiling window managers.

To be honest, it is hardcore, you can just do everything you want faster and you truly realise the truth that 'Keyboard is King'. For some people (including myself) compiz was one of the awesome things about Linux that pulled me away from Mac however I got over the effects and transitions when I moved to WMII. There is 0 transitions and effects, it just works and it does it fast. To give you an example of the benefits, by using the keyboard shortcuts and having all my applications load at start-up  they all launch in 10 or so seconds on my desktop (WMII literally takes like half a second to load itself as opposed to Unity taking much longer), I then spend 10 seconds sending them to their appropriate workspaces and arranging them and I am ready to go. In a floating window manager like Unity, even with keyboard shortcuts, this would still take me twice as long. And probably 4 times as long . You start to see the time it takes to do something being limited to your thought process, not your computer (now if only my Internet was that fast! #RegionalAustraliaProblems).

WMII is a great window manager and gives me a great amount of control over my windows with the keyboard and works great with multiple monitors. You can easily move windows left, right up down, shift focus left, right, up, down, change between stacked, split and maximised layouts, move windows between workspaces etc. To get resizing working with the keyboard you will need to change your configuration file (take a look at ).

To install WMII on a Ubuntu, just run 'sudo apt-get install wmii'. However you may want a run down on how to user WMII which I have done inside this video tutorial I have done . Also here is my . 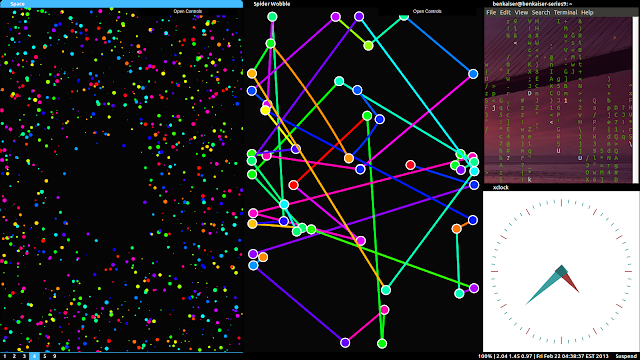 configuration which you can place at ~/.wmii/wmiirc