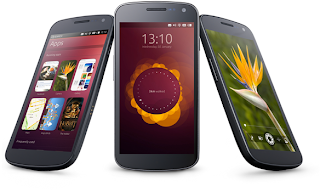 Almost two weeks ago Ubuntu released a new interface to their operating system for mobile phones. For anyone who missed it, . Since its debut, there has been a lot of negative talk suggesting . However Mark Shuttleworth nailed it in the industry proposition by explaining how current operating systems have completely different interfaces even when they come from the same provider (with examples of Windows, Google and Mac operating systems) and that Ubuntu bridges this gap between phone, desktop and TV.

The key feature I see in Ubuntu Phone OS is the ability for "superphones" to run a full Ubuntu desktop when docked. This feature can be seen under the "The phone with the heart of a PC" on . This can allow for a new era where our data is on this one device, and we can have it docked at home, go mobile and continue using the same application in its mobile interface, and then dock it at work and keep working without the need of syncing our data, or interrupting our work by having to move to a new device.

The new interface alone is a fresh now approach to a phone operating system. We are all used to iOS's swipe to unlock, and android's various different unlock screens whereas Ubuntu requires no unlock screen at all. You are instead presented with a "welcome screen" that shows a beautiful animation with short snippets for your notifications. There is no barrier to your content like in iOS and android because the system utilizes the 4 edges of the phone to achieve tasks ans as such, no buttons are required. The edges help you navigate with each edge achieving a specific task.

Why it isn't a Game Changer just yet

Ubuntu Phone OS is still in private development by Canonical but has been said to be released around the end of February. Once they release the source they will also release an image that can be installed onto a Galaxy Nexus and hopefully some community members will be porting it to some popular android phones.
Canonical have also said that they are currently having discussions with OEM's to get Ubuntu shipping on phones with plans for a debut in Q4 2013 and release in Q1 2014. Until then the only people with it on their phones will be individuals who are game enough to install the development images on their android phones.

My Plans for Ubuntu Phone

I am very eager to not only try the Ubuntu Phone OS on my phone, but to start creating applications for this revolutionary platform. If an image is released for some other high end phones in the market early after the release of the source for the OS, I will most likely purchase one of these phones to be my next device. This is because my galaxy note (1) is starting to feel old now especially compared to some of the new 5" phablets released at CES 2013